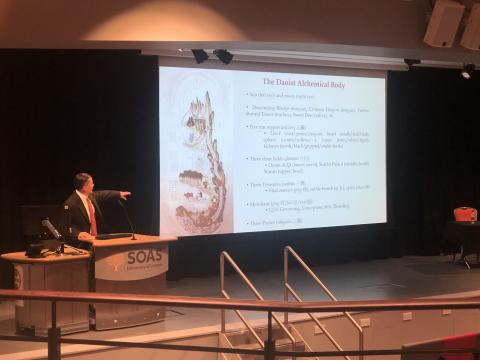 An entire week of public events at the Centre of Yoga Studies at SOAS (25-29 March 2019) was organised around a two-day workshop held by Suzanne Newcombe (Ayuryog/Inform/Open University) and Karen O'Brien-Kop (SOAS) aptly titled “Disciplines and Dialogue: The Future of Yoga and Meditation Studies,” with in-depth discussions on the different disciplinary approaches to studying yoga and meditation in the humanities, sciences, and social sciences. Most of those at the workshop will be contributors to the forthcoming Routledge Handbook of Yoga and Meditation.

This intense and fruitful week dedicated to Yoga ended with a presentation that is of direct interest for the Ayuryog project: Alchemy in Daoism and Hatha Yoga, a discussion with Louis Komjathy (University of San Diego) and James Mallinson (SOAS).

In the Haṭhayoga texts, alchemy is first and foremost a metaphor for practice. For an example of the use of alchemical metaphors in yoga literature, see Haṭhayogapradīpikā 4.96:

The mercury that is the mind, solidified, devoid of unsteadiness, wanders in the space called “without support” because of having been oxidized by the sulfur that is the sound [Oṃ].

For their part, some alchemical treatises show a direct link with Haṭhayoga literature. For example, according to Jan Meulenbeld, Chapter One of the Rasārṇava (ca. twelfth century), one of the earliest and most important treatises on alchemy, deals with liberation in this life (jīvanmukti) obtained by means of mercury, and with the origin of mercury as Śiva's semen. In this chapter, alchemy is regarded as belonging to karmayoga, a way of life governed by the cultivation of either rasa (mercury) or vāyu (breath), and the two ways are described as parallel methods. The practitioner of the alchemical art should also be experienced in Haṭhayoga, Jan Meulenbeld concludes, on the basis of a textual parallel of Rasārṇava 1.26 with Haṭhayogapradīpikā 3.47 (A History of Indian Medical Literature, 2000, vol. IIA, pages 675 et 681, and vol. IIB, page 687, notes 72 and 73).

In view of the fact that the study of the links between yoga and alchemy is in its infancy, it is unnecessary to say that the comparative approach of yoga and Daoism raises several levels of complexity. Among the reasons we can briefly note the sparse knowledge of the historical context of their early development and mutual influence, the fact that the technical terminology and its application in terms of practice and representation parallel with difficulty, and the reconstruction of practices according to textual testimony being uncertain.

This is not a new issue. An important article by Jean Filliozat entitled “Taoism et Yoga” was published in 1969 in the Journal asiatique (Paris). This article is directly inspired by the publication (in the same journal) of a monograph on the "processes of nourishing the vital principle in the ancient Daoism religion”, by the pioneering scholar Henri Maspero, which suddenly gave access to a mass of information on Daoist practices and representations (Henri Maspero, Mélanges postumes sur les religions et l’histoire de la Chine. Vol. 2. Le Taoïsme, 1950). Maspero exposes, in particular, the “corporal techniques that preside over the search for immortality”, as well as “spiritual techniques: inner vision, meditation and mystical union”, and “physiological practices (alchemical, dietary, respiratory, sexual and gymnastic)”.

According to Jean Filliozat (“Taoism et Yoga”) and on the basis of an article by Paul Pelliot, it seems that the question of the affinity between Indian doctrines and Taoism was raised at a much earlier date, in the context of the Sanskrit translation of the Dao De-Jing, in about 646 CE (there is no record of this, but Chinese historiography indicates that the Emperor of China ordered the Dao De-Jing to be translated into Sanskrit for the use of an Indian king of Assam, Kumāra Bhāskaravarman): in the context of the Sanskrit translation of the Dao De-Jing, it seems that intensive discussions took place between the Buddhist pilgrim Hiuan-tsang (= Xuanzang), who considered that Daoism was very different from Indian doctrines, while his Daoist colleague Ts'ai Houang considered they are based on the same tendencies (Filliozat 1969: 41, quoting Pelliot 1912: “Autour d’une traduction du Tao tö-king, in T’oung Pao”).

Filliozat (1969: 42) interprets these intensive discussions in this way :

“The ancient Daoist speculations associated early with a set of very complex spiritual and bodily techniques, particularly aimed at preparing for the adept an immortal body [...]. Hiuan-tsang, a philosopher, disapproved of these techniques, he considered them ridiculous, and, for fear of the mockery of the Indians, he opposed the translation of a preface added to the translation of the Tao te-king, a preface in which he had mentioned the practice […] consisting in grinding teeth and swallowing saliva. But such physical practices would in fact have shocked only those Indians who were of the same ideas as Hiuan-tsang (that is, Buddhist philosophy). The bodily techniques were indeed known in India and even more in vogue than in China, and have been attested since ancient times.”

It seems that we are no more advanced today on the links between Daoism and Haṭhayoga than formerly Xuanzang and Ts'ai Houang were, concerning the links between Daoism and Indian doctrines (here, especially Buddhism). Even if the internal and external practices developed in Haṭhayoga and Daoism seem very close, there is no truth, however, to be learned by comparison, and without the support of scientific evidence it remains possible that these affinities are only apparent and fall under superficial assimilations.

In this regard, the opportunity of a comparative session between Daoism and Haṭhayoga with regard to alchemical practices was invaluable, especially because both Louis Komjathy and James Mallinson (SOAS) have long-term rigorous textual expertise and experience in putting these texts into practice. Louis Komjathy presented the relationship between waidan (external alchemy), including mercury, and neidan (internal alchemy). James Mallinson presented the alchemical terminology used to illustrate the practices set forth in the oldest Haṭhayoga text, the Amṛtasiddhi (eleventh century), which happens to be a Buddhist text. From this comparative session, any alchemical exchange between Daoism and Haṭhayoga does not appear obvious, as if to prove Xuanzang right? 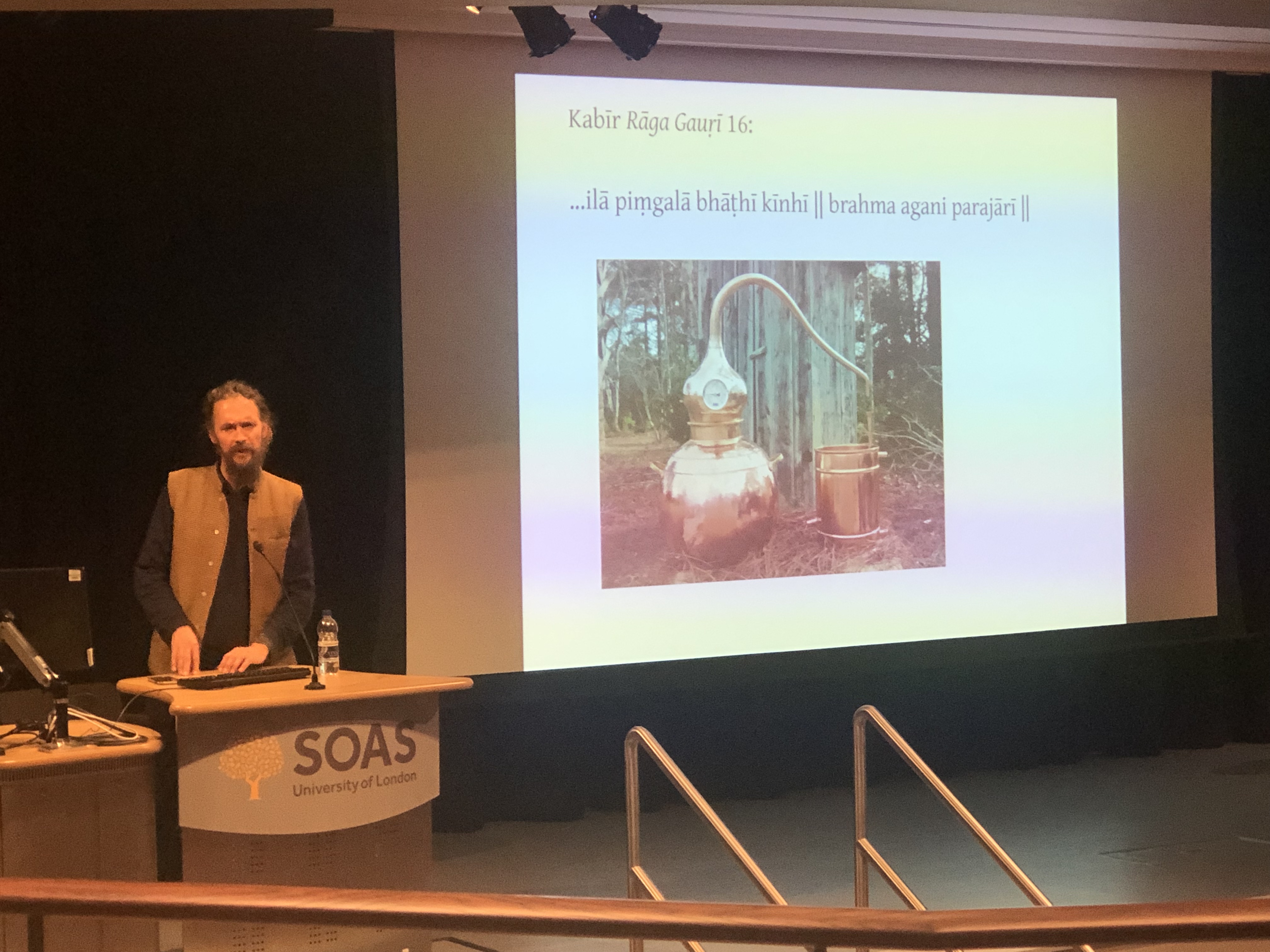