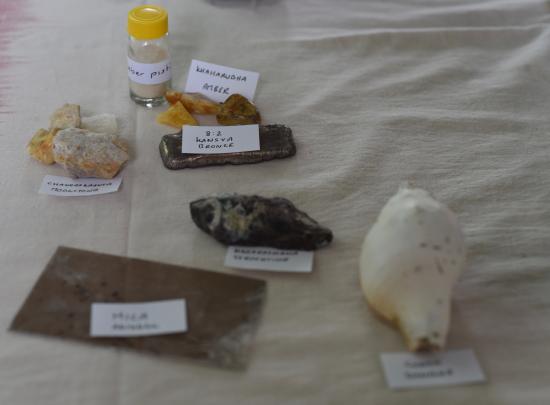 In recent times, technology giants such as Google have enthusiastically funded research aimed specifically at harnessing technologies to increase our understanding of the biology that controls ageing and lifespan (www.calicolabs.com). It is their hope to develop interventions that may assist people ‘to lead longer and healthier lives’. However, the ability to live indefinitely, or at least improve the quality and length of life, has been a human fascination over the millennia. Long before digital experts grappled with the idea of e-immortality and the possibility of living eternally through online identities, human cultures have attempted to transcend the inevitability of entropy and death.

In October 2016, a gathering at the University of Vienna became a cauldron of ideas and lively discussions aimed at exploring longevity practices, treatment techniques and formulations. As part of the ERC-funded AyurYog Project, Dr Dagmar Wujastyk (University of Vienna) and her team hosted an extraordinary two-day workshop of international scholars to discuss (and experiment with) concepts of "Rejuvenation, Longevity and Immortality” that have been documented in the premodern literature of South and Inner Asia. 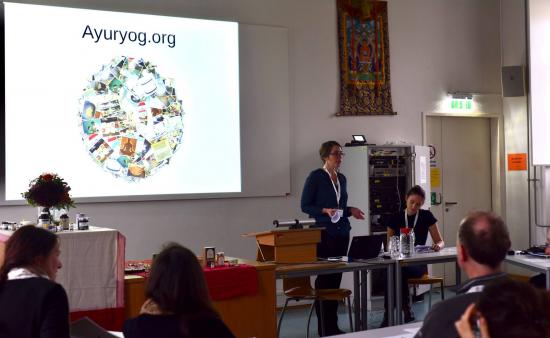 Dr Wujastyk opened the discussions with her explanation of rasāyana in Sanskrit medical and alchemical literature. As one of eight subject areas of Indian medicine (āyurveda), the doctrine of rasāyana is generally concerned with “preserving youthful vigour, promoting longevity, mental power and strength, and eliminating disease”. However, the term rasāyana refers not only to medicines and substances, but also to the methodology of rasāyana therapy. In addition to reading Sanskrit passages, Dr Wujastyk provided the audience with the opportunity to taste medicines based on recipes found in the oldest treatise known on Āyurveda, the Carakasaṃhitā (circa. 1st century C.E.). We tried āmalaka (Indian gooseberry) as a candy, which aids digestion, and brahmarasāyana, a sticky black paste that is consumed for rejuvenation purposes. No one hesitated! 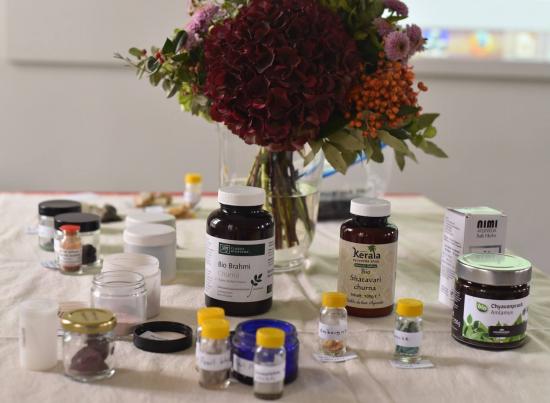 The conference surveyed knowledge across the Indian sub-continent, from northern Pakistan and Tibet to southern Tamil Nadu and Sri Lanka. Diverse concepts of longevity and practices aimed at immortality were examined. Overall, the conference programme successfully engaged scholars and enthusiasts by challenging their views through experimentation, discussion and new research findings. 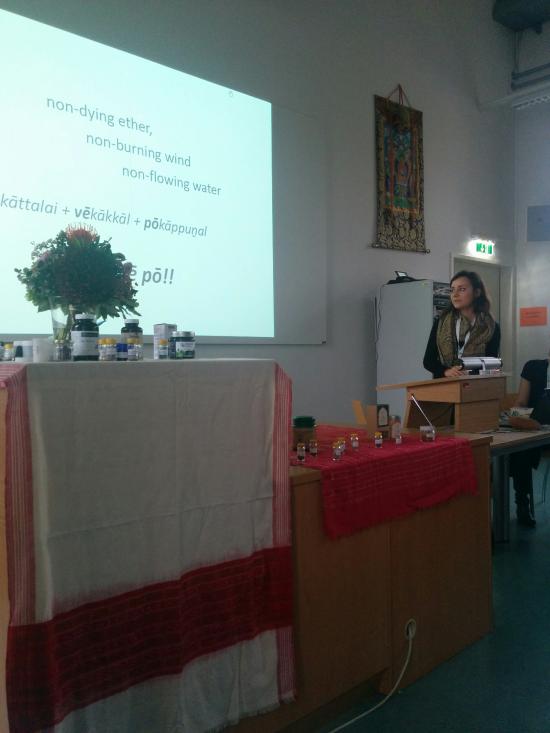 PhD candidate Ilona Kedzia (Jagiellonian University) examined techniques for mastering deathlessness in Tamil Siddha literature. After describing a largely unedited corpus of texts, she focused on recipes for drugs used in kāyakaṟpam (Sanskrit: kāyakalpam), a therapy designed for prolonging life. Other documented medical therapies, herbs and substances are believed to offer special powers. For example, the fourth crop of karumūlikai or black ‘marking nut’ is believed to remove wrinkles and grey hair. Another striking example was the consumption of urine ideally captured from a ‘young boy fed with sweets’. The urine is boiled with slaked lime and purified for three days before forming the substance known as amuri, which is consumed over a period of 40 days to strengthen the body, remove phlegm and ultimately achieve immortality (Pulastyar Nāṉakaṟpam 222: 72-3). Ms Kedzia preliminary anthropological research reveals that many of these methods of preparation and consumption are still used today. 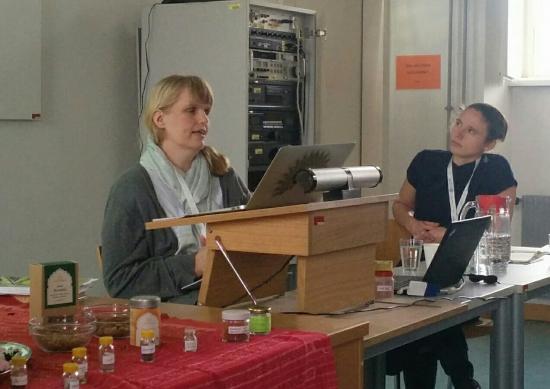 Dr Claudia Preckel (Ruhr-University Bochum), a specialist in Unani medicine (Ṭibb-e yūnānī), described some of the sophisticated elixirs of the body in Arabic sources. She explained that although many of the ideas originate from Greek medical works, the formulations and practices were further developed in Arabic, Persian and South Asian (Muslim) literature. In her analysis, Dr Preckel noted the linguistic connections (and some disconnections) in terminology as concepts were translated from Greek and Latin to Arabic, Persian and Urdu, and later intermingled with Indian sub-continents medical concepts such as rasa.

Dr Francis Zimmermann (EHESS) brought us closer to the present day with his talk on rasāyana in the modern market place. The industrial-scale production of rejuvenation medicines in India has followed from the popularity and commercial success of companies such as Himalayan Wellness (formerly The Himalayan Drug Co.) and the national standardisation of Āyurvedic ingredients and recipes in the Ayurvedic Formulary of India (published in 1978). Dr Zimmermann highlighted the inspiration that Sanskrit literature is offering to these companies in their drive for scientific innovation in the development of proprietary medicines. The database of traditional knowledge has become a valuable resource used in litigation by the Indian government when battling US (and other international) companies for their misappropriation of medicinal knowledge in the form of patents, proprietary rights and commercial variants. Interestingly, Dr Zimmermann’s research has also identified the change in audience for such formulations. Ancient recipes that were traditionally aimed at maintaining the virility of young men have been re-packaged and marketed to the growing number of appearance and health-conscious women of India. Pharmaceutical companies are exploiting a cultural shift in a female generation who are vulnerable to new social views about ageing and sexual dysfunction. This is generating a high demand for rejuvenation products for women.

A key term for age in medieval Sanskrit literature is vayas. Dr Christèle Barois (AyurYog, University of Vienna) examined its meaning in various contexts, including yoga, alchemy and some diagnostic procedures of Āyurveda. Her research revealed medieval understandings of age and attitudes towards it. One such example is the idea of vayas as the ‘useful’ lifespan of a person, which is said to be only 20 to 30 years, yet may be extended to 100 years by specific Āyurvedic treatments.

Some of the most fascinating claims for life extension can be found in the textual corpus on Yoga. Three specialists of this vast literature examined context-specific examples from the periods of classical, medieval and modern Yoga. After many years of constructing critical editions of the Carakasaṃhitā and the Pātañjalayogaśāstra, Dr Philipp Maas (University of Leipzig) was able to dissect the meaning of rasāyana in classical Sāṅkhya-Yoga. With ease, Dr Maas took us back to the far distant past of 4th-century greater Magadha where Vedic Brahmanism and Śramaṇa religions were intermingling and producing new fusions of philosophical and religious ideas. He revealed the complexity of dealing with textual sources and yet, convincingly argued for the distinct meaning the term rasāyana in the Pātañjalayogaśāstra as “an elixir of longevity used in a different realm of the cosmos”, which appears unrelated to its meaning in classical Āyurveda. In fact, Dr Maas’s argument prompted some academics in the audience to reconsider Caraka’s definition of rasāyana, which led to a lively scholarly debate. 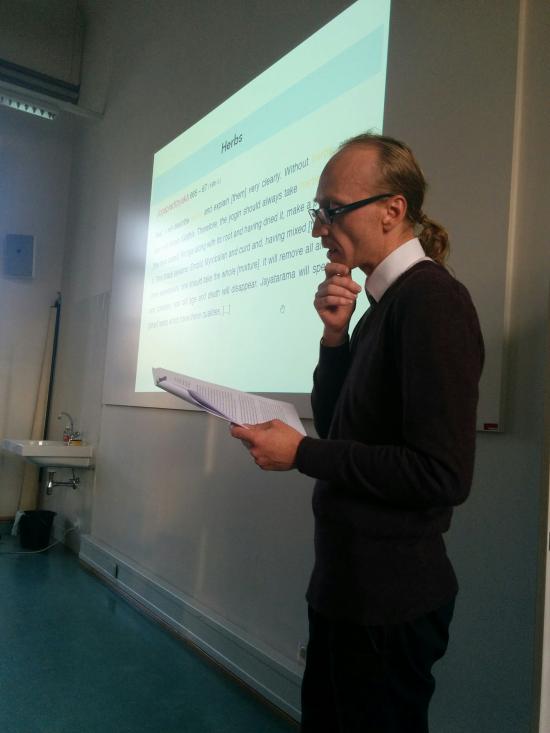 Dr Jason Birch (SOAS, University of London) used his philological expertise to examine the concepts of rejuvenation and immortality in Medieval Yoga traditions. In particular, he focussed on the use of herbs, which are mainly credited with the attainment of special yogic powers (siddhis) and the healing of diseases. Dr Birch noted that it is the attainment of immortality that is more closely linked to the soteriological aim of liberation, rather than rejuvenation and longevity. The textual evidence suggests that immortality was understood literally, insofar as it was accepted that liberated Yogins could live forever in an ageless and disease-free body. Interestingly, Dr Birch also proposed that herbs never appear in the texts as an essential component for the practice of Yoga nor for achieving its ultimate goal.

In keeping with the theme of immortality, Dr Suzanne Newcombe (AyurYog, Inform, LSE) analysed modern accounts of longevity claims by Sadhus and other Yoga adepts, in particular, the practice of kāyakalpa. She identified the folk narrative that enables such stories to persist in India: “The immortality story is compelling and resonates across different concerns at every re-telling. Ambiguity of goals is part of its narrative strength - and experiential truths can feel more important - and be more transformative - than empirical confirmation.” Dr Newcombe observed that the ambiguity in meaning given to the term yoga has enabled it to remain relevant to diverse groups of people throughout the modern period and that this ambiguity has assisted in the “longevity” of yoga. Her research also revealed that the emerging concepts of ‘human hibernation’ and ‘hypnotism’ in Western medical literature of the eighteenth and nineteenth centuries were used by some to describe the meditative attainments of Yogins and this resulted in a conflation of world views.

On the final day of the conference, the University’s chemistry lab was turned into an alchemical foundry for ancient Sanskrit recipes. Initially, academics more familiar with comforts of lecture halls showed signs of hesitation in this environment. However, the interactive nature of the experiments conducted by the alchemical specialist Andrew Mason, broke down more than materials. Mr Mason dissolved barriers of communication across disciplines and subject matter. Indologists were bubbling with enthusiasm as they bumped shoulders with chemistry professors and medical students. Everyone was keen to glimpse the congealing of miraculous substances such as mercury. This interdisciplinary alchemical extraordinaire left the sweet taste of new knowledge tinged with the sour smell of cooked sulphur. 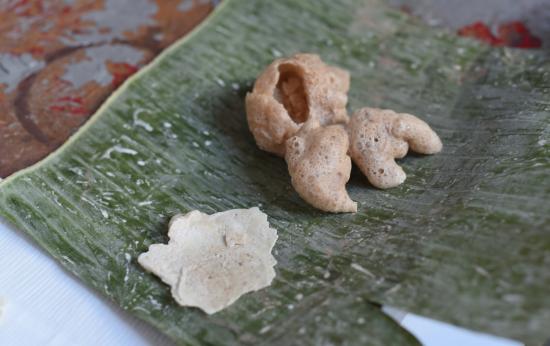 It seemed fitting that the final phase of our journey to eternity took place in the mountain peaks of Tibet. Dr Cathy Cantwell (University of Oxford) shared her reflections on rasāyana, bcud len and related practices in Nyingma (rnying ma) tantric ritual. She explained that bcud len is understood as "imbibing the essence juice” and often takes the form of a subsidiary practice or pill in this tradition. It is equivalent to the Sanskrit term, rasāyana, “but in Tibetan Buddhist ritual manuals, both terms occur, apparently with slightly different connotations”. Dr Cantwell presented vividly coloured photographs from her fieldwork in Tibet. Her images brought to life the communal and ritualistic processes that surround the creation and distribution of these sacred compounds. 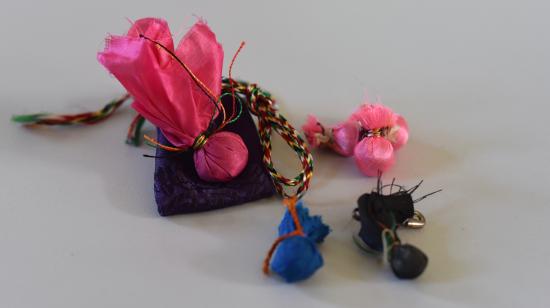 Packaged like parcels of hope in bright coloured silk wrappings, we were given the opportunity to examine samples of these compounds by Dr Barbara Gerke (University of Vienna), who presented an account of the use of mercury as a chülen (life giving substance) in Tibetan traditions. Dr Gerke contrasted the prolific use of mercury in recent times with the scarcity of references to it in pre-seventeenth century literature. The premodern context of mercury was mainly restricted to the attainment of supernatural powers by some Buddhist monks, whereas today it has become popular as an elixir for longevity among the lay community in Tibet and China. 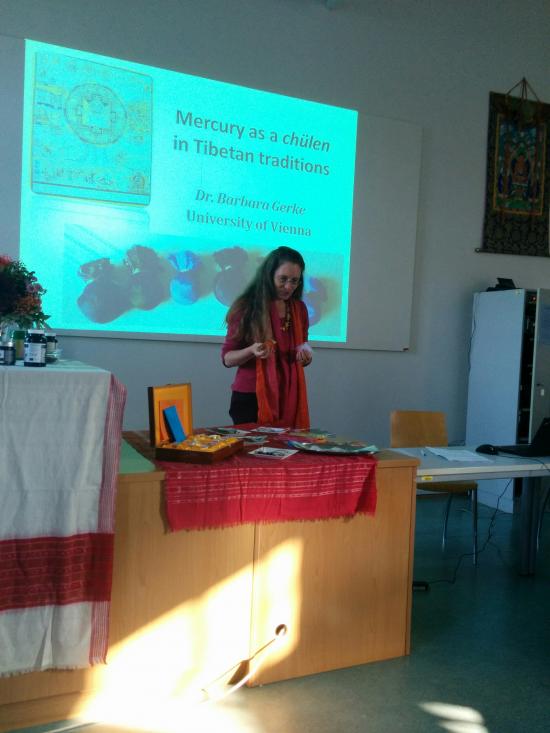 As a practitioner and teacher of Yoga and a consumer of alternative well-being products, this conference made me question some of the assumptions underlying my own practice and lifestyle, particularly in my pursuit of health and transcendence through yoga techniques and Āyurvedic medicines that are rooted in medieval world views quite different to my own. The conference exposed the complexity that arises not only from the collision of medieval traditions with the modern world, but also from the different cultural contexts, shifting demographics (e.g. age and gender) and the commercial pressures which are now shaping these disciplines. A true camaraderie formed as participants navigated this complexity by mapping the fault lines between yoga’s transcendent and worldly aims, Āyurveda's therapeutic and purgative formulations and the general divide between scientific and traditional knowledge. Yet, above all, what remained tangible was the perennial fascination humans have for overcoming or delaying the inevitability of death.

Also see the parallel posting, with some extra pictures, on The Luminescent. 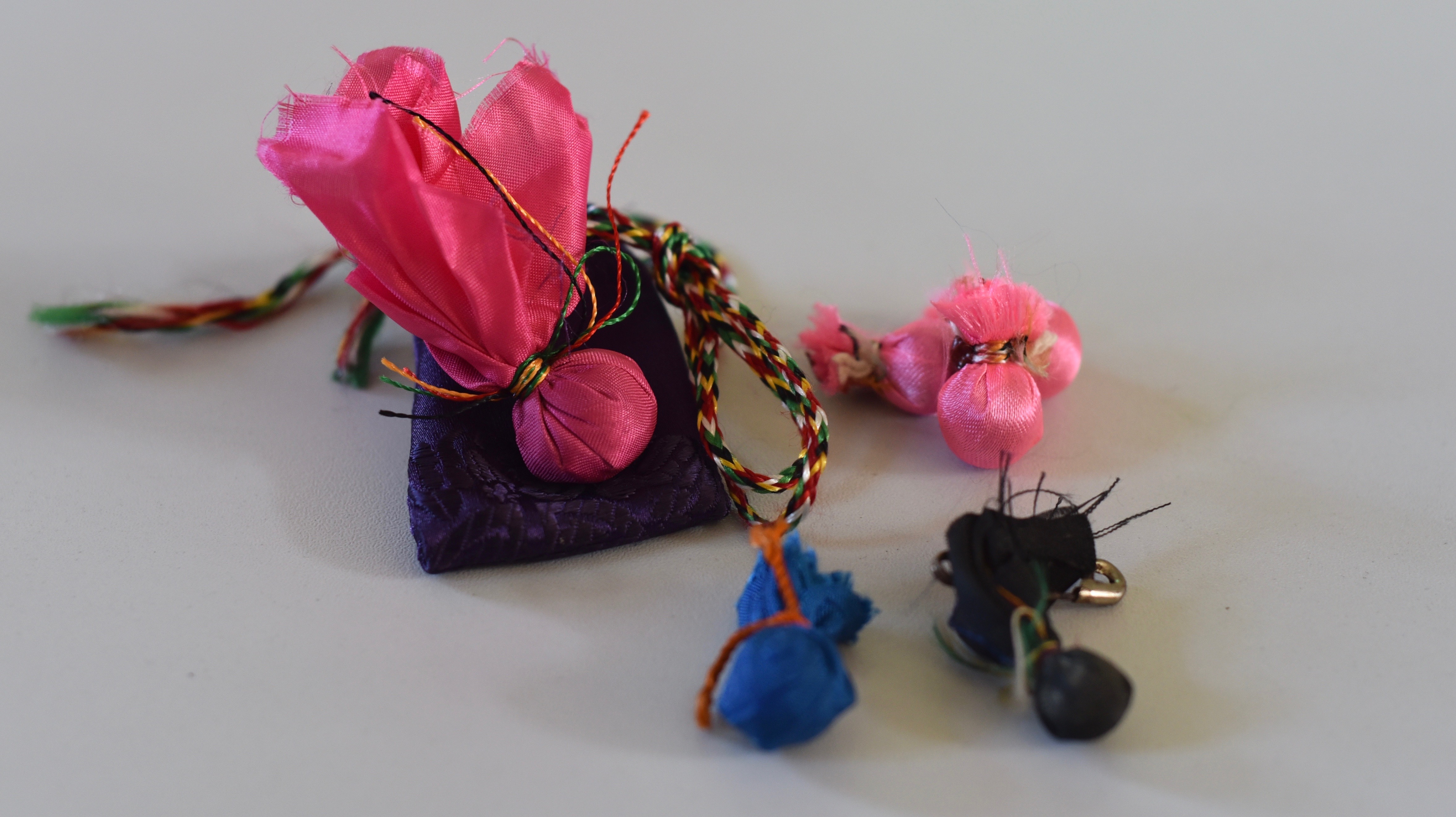 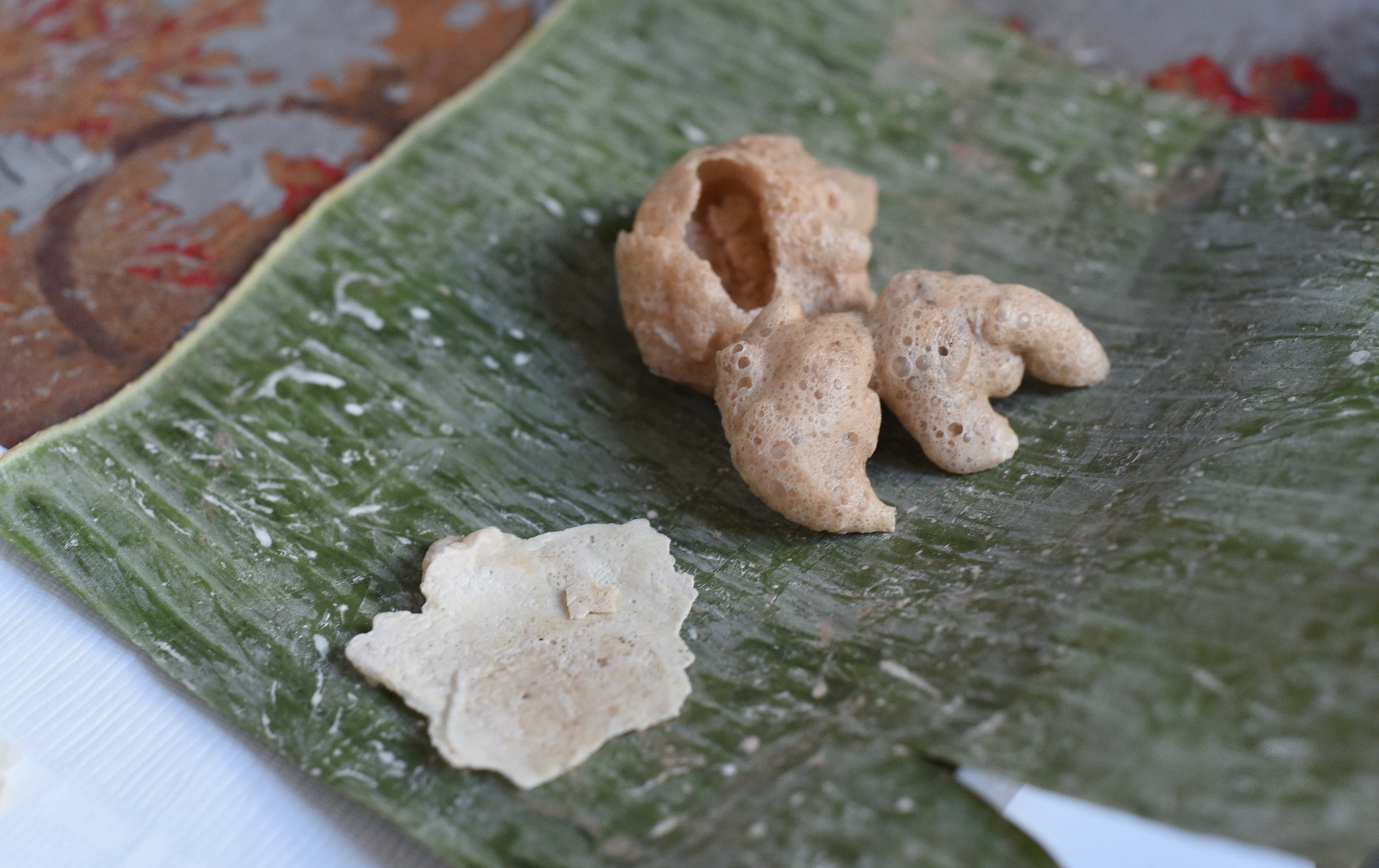 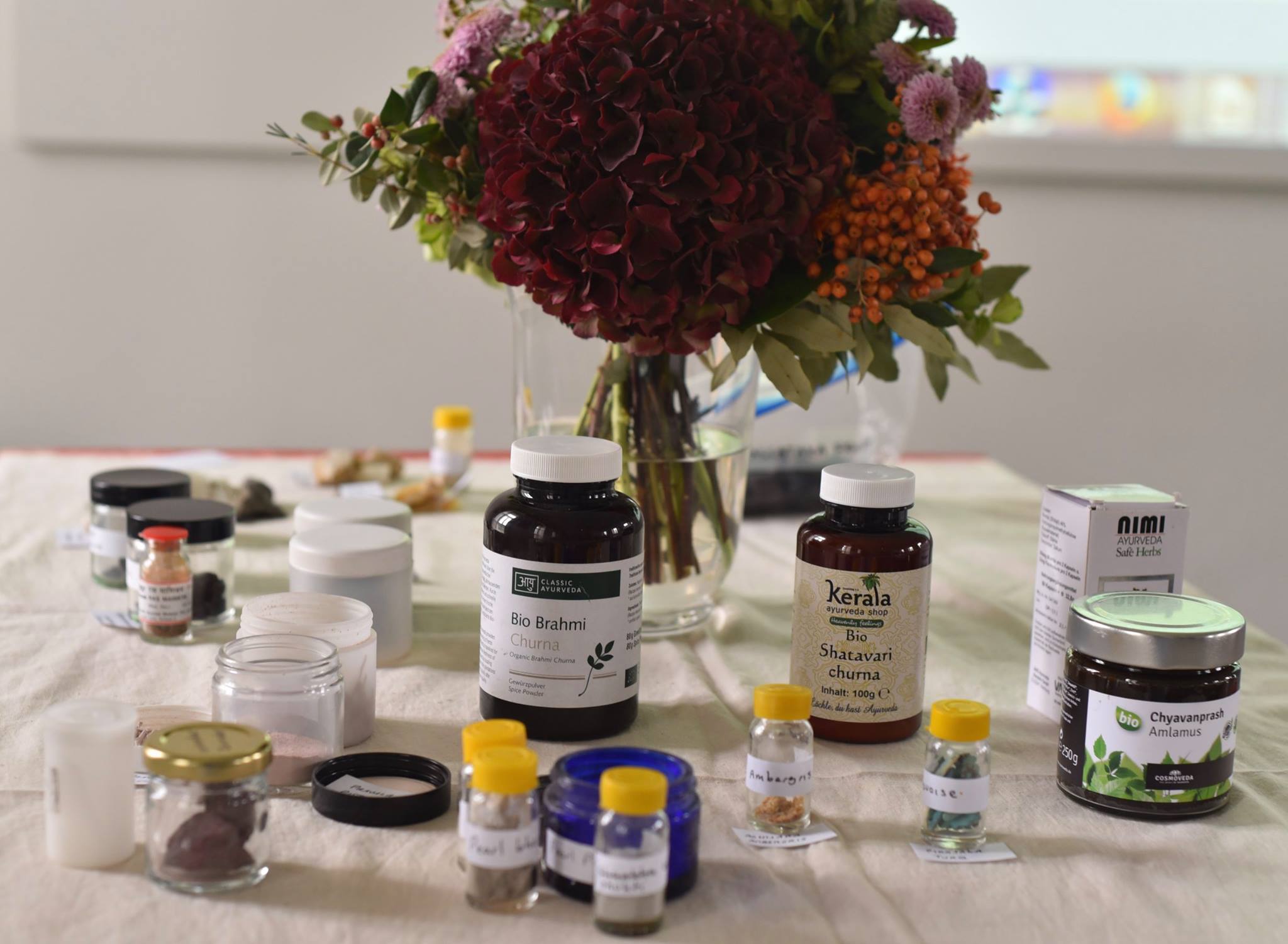 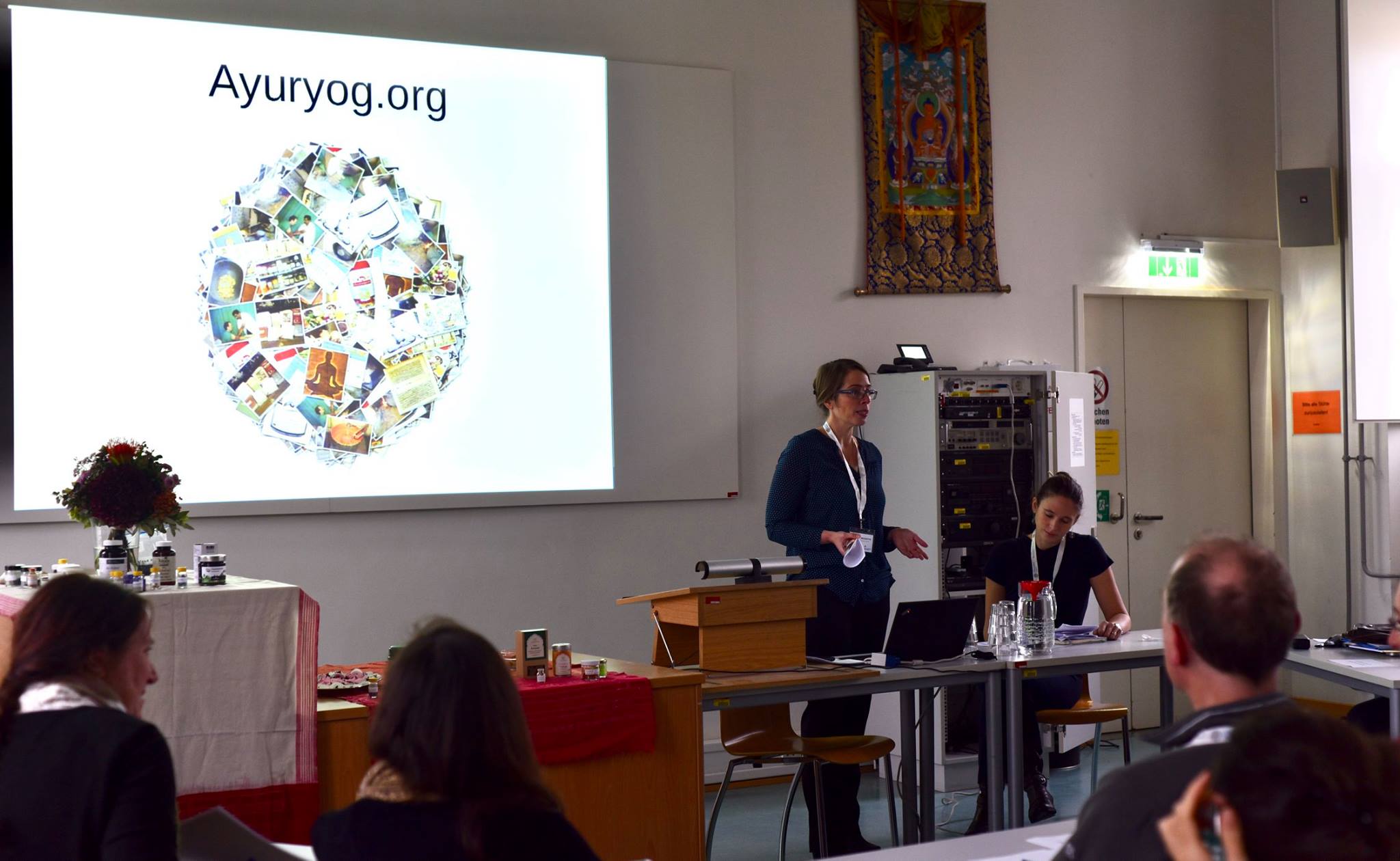 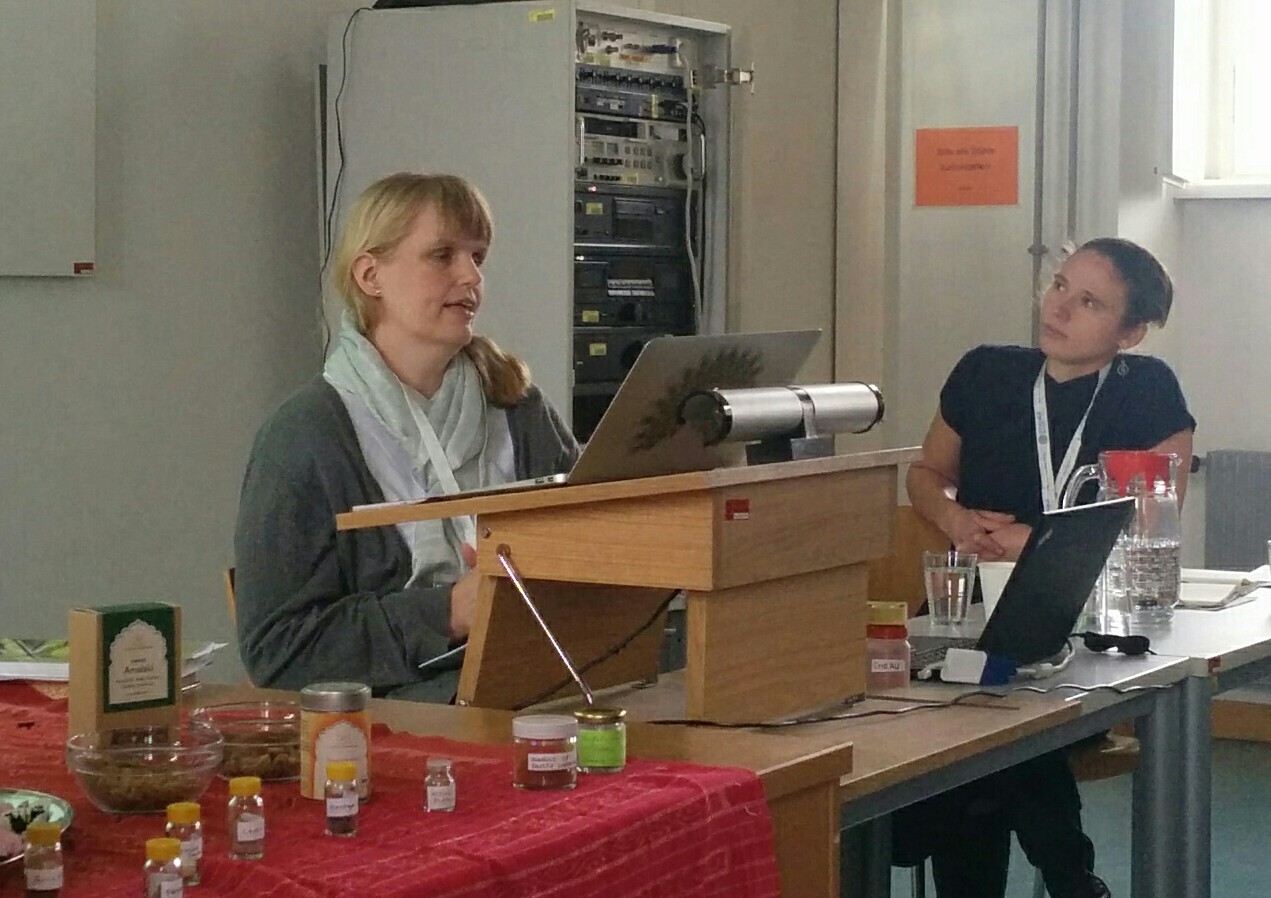 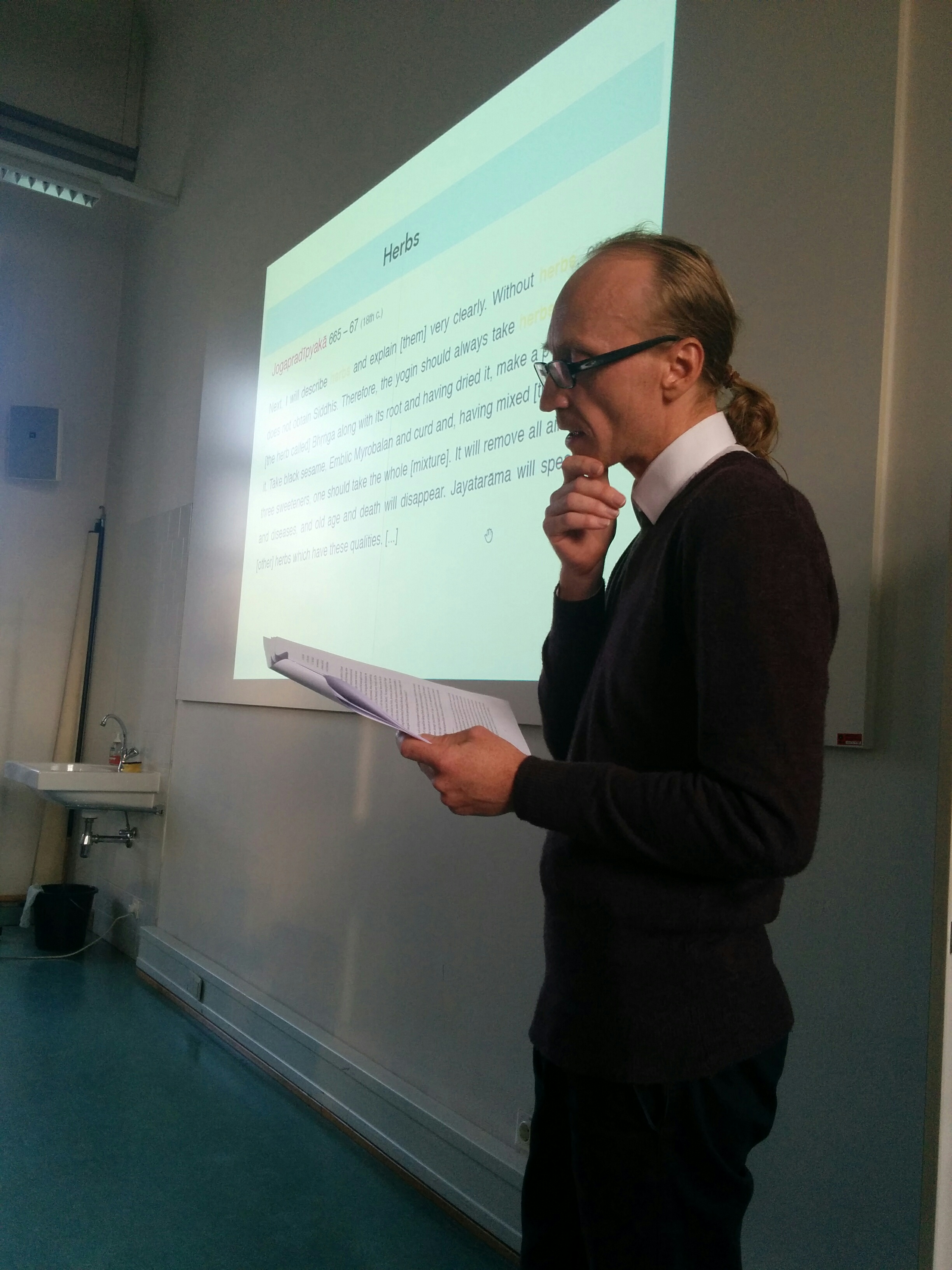 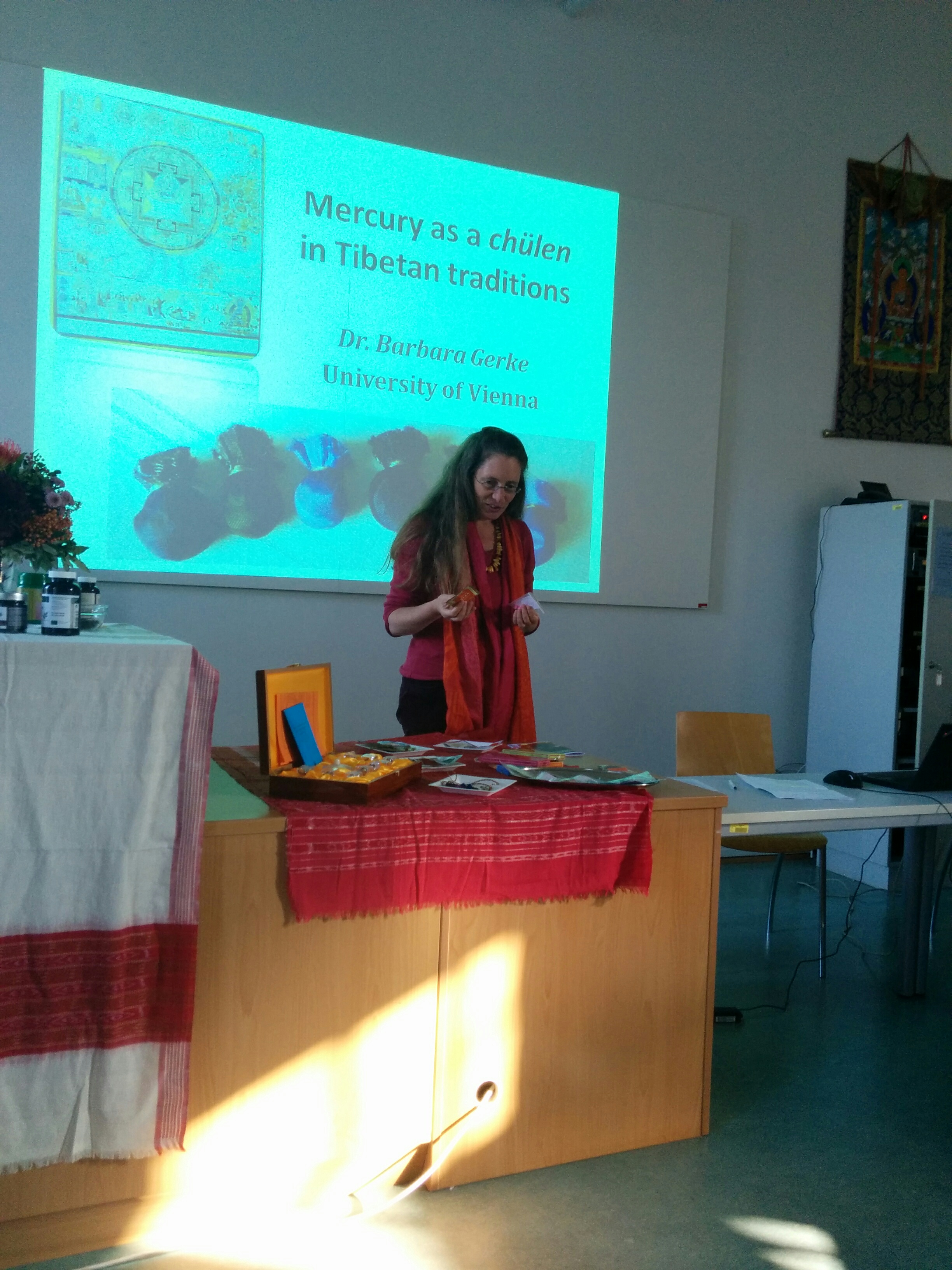 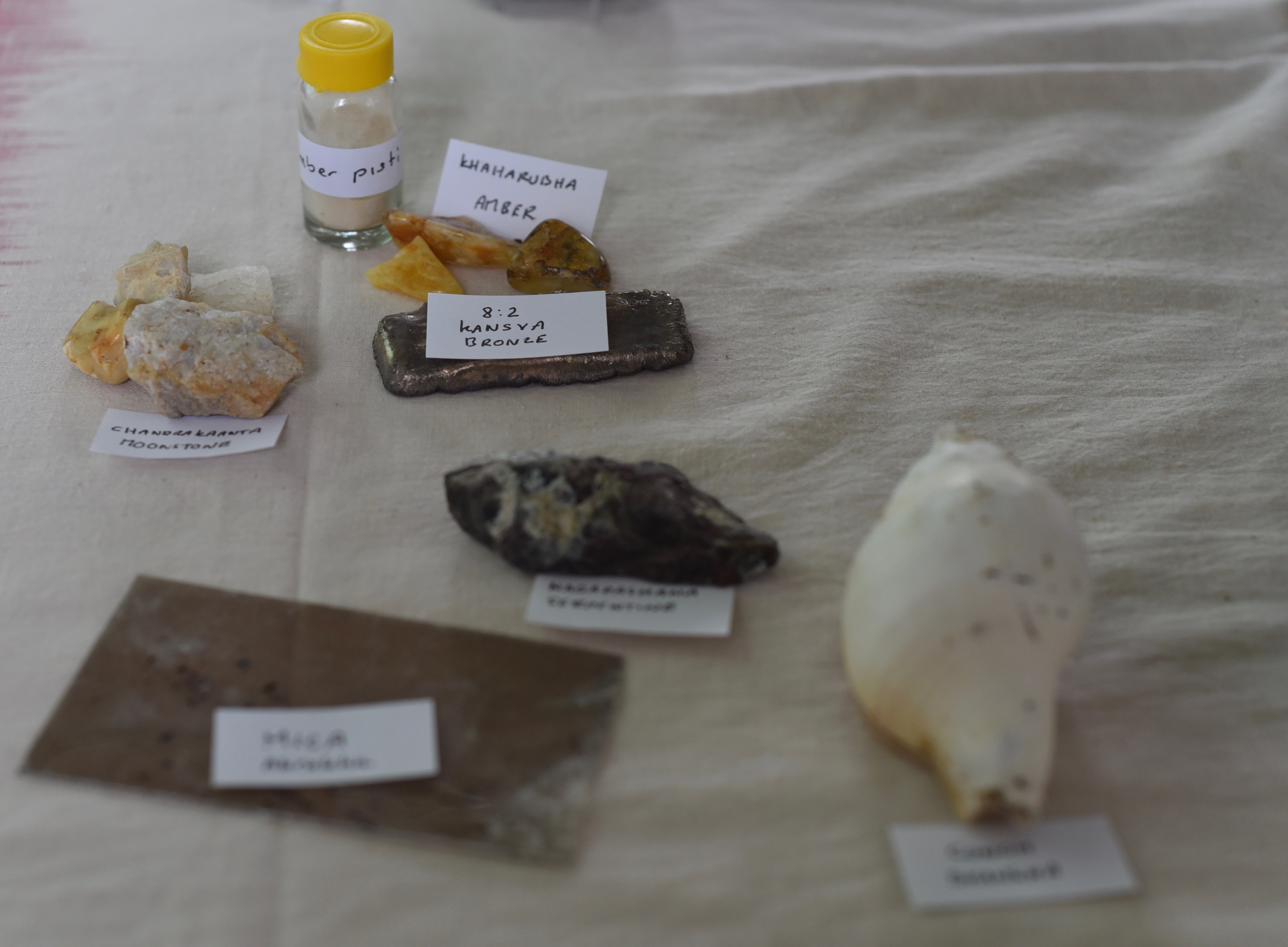 Title:
Recipes for immortality and the intoxicating alchemy of South and Inner Asia