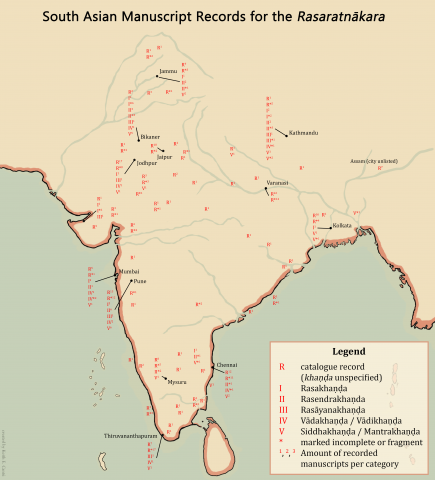 It has been a great opportunity to create twenty-one maps of extant manuscripts on Indian alchemy (rasaśāstra) for the project “Entangled Histories of Yoga, Ayurveda and Alchemy in South Asia,” which I hope will be of use to scholars and practitioners alike who are interested in taking a closer look at the geographical distribution of manuscript stemmata. Here is a short summary of the process I used as well as some consideration of the maps’ limitations.

To start I would consult the relevant entry for each manuscript in the New Catalogus Catalogorum (NCC), first published in 1949 by the University of Madras and now at least in its thirty-ninth volume, published in 2015. Most of the alchemical manuscripts start with the Sanskrit phoneme ra and are found in the twenty-third volume (2011). I would then separate the running text lists of manuscripts in the catalogue into individual lines and place them onto a spreadsheet (Google Docs was sufficient). In a few cases the manuscripts in the NCC are labeled as containing different texts or commentaries that may not reflect the alchemical work known by the same title, but I have avoided making a judgment on which manuscripts actually contain a given work and have left these considerations to future editors of a given work by including these in the overall count of manuscripts, even if doubtful. Next, using the institutional abbreviations provided in some volumes of the NCC (the list in the fifteenth volume, published in 2007, seems to be the most current), I would add the cities to each manuscript entry on the spreadsheet. After this I would tally up the manuscripts in a given city or town and plot them on a map that I created in Adobe Photoshop after tracing the outlines from a map of South Asia now in the public domain (Wagner & Debes, Leipzig, 1914). For the sake of a given map’s readability, I only included names for cities and towns that contained more than a total of five manuscripts for those maps with a relatively large amount of manuscripts, and more than a single manuscript for those maps with a relatively smaller amount of manuscripts.

In tallying the manuscripts I would make a distinction between those that were assumed by the NCC to be more or less complete (or simply listed without any determination of its state) on the one hand, and those marked “incomplete” (inc.) or “fragment” (fr.) on the other. I grouped together both “incomplete” and “fragment” as “incomplete” for the sake of the map’s readability. In the case of Rasaratnākara the manuscripts were further subdivided into their parts (khaṇḍas) for plotting on the map, although in some cases the specific parts were not listed in the NCC and had to be determined from the original catalogues. Some of the catalogues that I was unable to consult may list more data of relevance to the subdivision of parts.

Sometimes the catalogue referred to is the publication of a given institutional archive in a specific city, like Pune or Chennai, which makes the process of plotting the entries on the map fairly straightforward. However, sometimes a single catalogue contains lists of manuscripts spread out across a wide geographical area, such as the colonial-era Central Provinces or Bombay Presidency. In these cases, whenever possible, it has been necessary to consult the original catalogue to determine the precise location among multiple possibilities, and the precise locale is usually abbreviated in the entry for the manuscript itself or given in a title. Many catalogues list manuscripts in private collections such as those of local “Rajahs” and antiquarian collectors. Given the dates of some of these catalogues, it is possible that some of these private collections are no longer extant or have since been transferred to other collections or local libraries, but in the absence of further knowledge I have plotted them on the map according to the city or town listed in the catalogue. Some of the catalogue abbreviations unfortunately refer to handwritten lists and other sources that could not be tracked down and never appear to have been published, and in at least one case (Vishwabharati University in Santiniketan) it appears portions of the archive have been transferred to the Adyar Library and Research Centre. In any case, I have made a note on the map itself in cases of doubt.

The number of manuscript entries noted on the map for a given locality should prove as a useful barometer but is no substitute of course for physically confirming the manuscripts in a given archive or private collection. Sometimes a page number(s) of a catalogue is provided in the NCC, and not the manuscript number. Most of the time I have been able to review the relevant pages of the catalogue and track a given entry. If for whatever reason I have not been able to track down the original published record, however, then I have counted it as a single entry since we can only be sure that at least one entry is given and not more. Fortunately, if a page number and not a manuscript number is cited, the NCC in most cases notes when the relevant pages contain multiple manuscripts. On the other hand, I have encountered some cases in which there were a few more unlisted entries on a page number. My overall point is that the actual number of manuscripts in some of these archives may vary, so I recommend that the map be consulted with this kept in mind and be always compared with the original catalogues and data obtained from physical visits to a given archive or collection. Furthermore, on these maps I have so far not included the many manuscripts held in archives outside of South Asia, such as North America or Europe for example.

The NCC, while comprehensive, does have its own limitations and I have also added entries from other manuscript sources to these maps. For instance, in the case of the Rasaratnākara, Dagmar Wujastyk has confirmed in personal correspondence that there are many more manuscripts extant in the Kathmandu valley than were listed on the NCC that were preserved as part of the Nepal-German Manuscript Preservation Project (these have been analyzed by Madhusudan Rimal in a preliminary unpublished study). The manuscripts of Rasaratnākara held by Gujarat Ayurved University in Jamnagar also were not listed on the NCC. In such cases I have added additional entries to the map independently of the NCC, and taken a similar approach with other manuscripts in the event that additional manuscripts are noted.