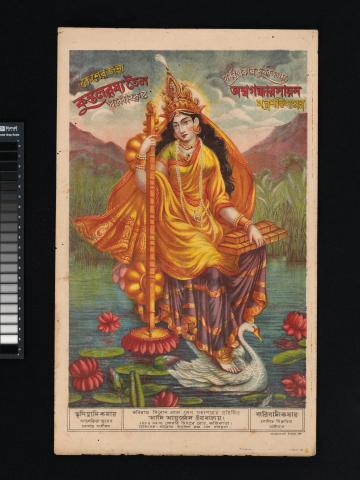 On March 25, UK news broadcaster Sky News reported that at least three billion people — nearly half of the world’s population — are under restriction due to the COVID19 coronavirus outbreak. Healthcare systems across the world are being tested as doctors from China to India to Italy to the US work around the clock to cure those afflicted with illness while the rest of us stay at home in an attempt to prevent the virus from spreading further.

Epidemics have long been on the minds of medical writers. Infectious diseases present challenges for physicians. Without treatment or vaccines they can have a profound impact on populations in a very short amount of time. While doctors seek treatment and cures, religious practitioners innovate. The goddess Śītalā, for example, is worshipped as an incarnation of Durga who cures poxes, sores, and other diseases. Fabrizio Ferarri’s 2015 Religion, Devotion and Medicine in North India: The Healing Power of Śītalā traces the evolution of this folk goddess as she is first thought to cure disease and later becomes the most important deity for those suffering from smallpox.

Within the Pāli Canon we find references to dysentery, a bacterial or parasitic infection, caused by contaminated food and water, or contact with contaminated objects. In one story Buddha speaks to monk suffering from the disease and learns that the other monks are not caring for him. Buddha says to the monastic community:

Where the Buddha encourages the community to care for one another, the Carakasaṃhitā places limitations on who can access medical treatments:

The following kinds of sick people should not be treated with humoral drainage, or any other therapy, even if the time is right for it:
*someone who has taken no action against a denunciation;
*someone poor;
*someone with no servants;
*those who fancy themselves as doctors;
*a violent person:
*a slanderer;
*one who takes pleasure in blatant wrongdoings;
*one whose blood or flesh is greatly enfeebled;
*someone assailed by an incurable disease;
*someone who shows signs of being about to die.
A physician who treats a sick person of this kind attracts a dreadful reputation.
There is a saying: It is the opinion of the wise that if an action produces a bad result, now or later, one should not perform it. (CS Vimānasthāna 3.45; Trsl. Wujastyk 1998: 49)

As Wujastyk notes, Ayurvedic physicians adhered to moral standards and at initiation take an oath to celebrate life, speak truth, eat a vegetarian diet, and other standards demonstrating a moral and life-supporting character. However, in remarks that call to mind the current discussion over private versus public healthcare in the United States, a commentary by Ḍalhaṇa on another Ayurvedic text, the Suśrutasaṃhitā, remarks that the poor should be abandoned because they cannot afford the medicines they may be prescribed. However, the fourth century monk Faxian describes instances in which the poor accepted patronage from the wealthy, removing them from the categories of those who should not be treated. (Wujastyk 1998: 12-13)

Access to medical supplies also plays a strong role in Caraka. The text describes a well-stocked hospital and warns about the difficulties of sale and importation during a crisis.

A physician, who wishes to make a king or wealthy minister drink an emetic or purge should prepare the supplies before they take the medicine. And if the medicine goes well, then the supplies can be used as additional items of diet; if the medicine fails, then once the problems have been reckoned up, it can be used remedially. For even if they are available in the market, it is not easy or appropriate to obtain medicines quickly very close to the time at which the crisis develops. (CS Sūtrasthāna 15.3; Trsl. Wujastyk 1998: 35)

Epidemics are signaled by environmental changes and can be traced back to corruption within leadership. Corruption leads to unrighteousness. According to the Caraka, they destroy the air, water, place, and land, causing the oubreak of epidemics.

Thus, when the leaders in a district, city, guild, or community transgress virtue, they cause their people to live unrighteously. Their subjects and dependents from town and country, and those who make their living from commerce, start to make that unrighteousness grow. The next thing is that the unrighteousness suddenly overwrites virtue. Then, those whose virtue is overwhelmed are abandoned even by the gods. Next, the seasons bring calamity on those who have unrighteous leaders, on those who have been abandoned by the gods.
So the rains do not provide water at the proper time, or it rains in the wrong way. The winds do not blow properly. The earth suffers disaster. The waters dry up. The herbs become denatured, and mutate.
Then they bring epidemic destruction on the localities, because of the corruption in what one touches, and in what is edible. (CS Vimānasthāna 3.20; Trsl. Wujastyk 1998: 41-42)

Much of contemporary Western medicine focuses on palliative and curative care rather than providing templates for preventative measures. Currently, the World Health Organization’s preventative advice for COVID19 includes frequent hand-washing, maintaining a physical distance of 1 metre/3 feet, avoiding the touching of one’s eyes, nose and mouth, sneezing and coughing into a bent elbow or tissue, and seeking medical care early.

While everyone adjusts to medium- to long-term isolation, we can look to the past to see how others ordered their days and maintained preventative healthcare routines. Within the Ayurvedic system we find daily routines laid out to keep the vital principles or humours (doṣa) of wind (vāta), bile (pitta), and phlegm (kapha) in balance. These principles cycle throughout the day between sunrise to sunset and sunset to sunrise. One should awaken at sunrise to take advantage of the light, exhilarating, and fresh attributes of motion, whereas when one awaken during the stability phase they will be burdened with slowness and heaviness. The metabolism period falls at midday and is the best time for the day’s main meal. Longer-term treatments such as pañcakarma follow much of the same regime as that below with the introduction of purificatory treatments that enduce the excretion of bodily fluids. Such treatments always take place under the supervision of Ayurvedic medical staff for days and even weeks. They should not be performed on one's own.

Foods and grooming (or what we might today call self-care) play an important role in Ayurvedic treatements as well as in everyday health. Whether foods contain a light or heavy quality and the amount consumed depends upon the individual’s digestive powers. (CS Sūtrashāna 5.4-9) Caraka advises one not eat an excess of heavy foods, such as dried meats or vegetables and lotus tubers and stems. One should also not overindulge in dairy products, pork, beef, buffalo, fish, corn, sour milk, or certain barley dishes. Foods to be regularly ingested include various types of rice, black beans or lentils, rock salt, fruit, barley, rain water, milk, ghee, and honey. (10-12) Eye ointments, the smoking of plants, fats, minerals and aromatics, consumption of oils, teeth brushing, gargling, rubbing oil on the body, bathing, changing clothes, using perfumes, wearing ornaments, cleaning the feet and anus, and maintaining hair and nail grooming help maintain health. (13-99)

The AyurYog team wishes you good health, from our self-isolation to yours.

Image: Saraswati ca. 1885–95, Lithograph, Metropolitan Museum of Art, Creative Commons
Sarasvati is shown holding a vina and a stack of books as befits her role as a goddess of music and learning (cognition). This image, like the Kali, was produced as an advertisement— in this instance for the Ayurveda medical store of Kaviraj Binod Lal Sen, purveyors of hair oil and tonics for lethargy and other ailments.